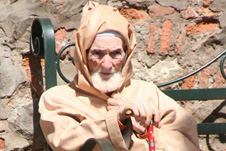 The indigenous Berber were gradually conquered and subdued by the Muslim Arabs after 684AD.

Sunni Islam is the state religion. The government is committed to the preservation of Islam as the religion of all Moroccans. Under the present constitution, a Moroccan church of former Muslims cannot be recognized. Other religious groups are tolerated so long as their ministry is confined to expatriate communities.

*over 95% of Christians are not Moroccan in origin

Located in the northwest corner of Africa, Morocco has fertile coastal areas in the north and barren Atlas mountains inland and Sahara Desert to south and southeast. There are also 252,000 square kilometers of former Spanish Sahara claimed and occupied by Morocco since 1975.

Agriculture, tourism and especially phosphate mining are important foreign exchange earners. Morocco and the Western Sahara have 70% of the world’s phosphate reserves.

The cost of the Sahara war has deeply affected the economy. There is widespread poverty and high unemployment (50% for youth). Severe droughts in the 1980s and ’90s added to the difficulties. Millions of Moroccans seek work elsewhere, especially in Europe. Significant oil deposits were discovered in 2000.