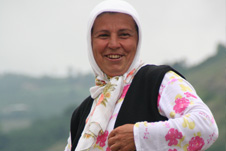 Turks 76- 80%. A Central Asian people that conquered and largely absorbed the indigenous peoples of the land from the 11th Century onward. Though ethnically diverse, Turks have a fairly homogeneous culture. Distinctive sub-groups:

Turkey”s Ottoman Empire was for centuries the guardian of all the holy places of Islam and its chief protagonist. Since the sweeping reforms of the 1920s, Turkey has officially been a secular state but in recent years Islam has become politically more important. The constitutional guarantee of religious freedom has not been fully upheld. There continues to be instances of discrimination and harassment of religious minorities though there has been a distinct improvement since 2000.

Straddles two continents; 3% in Europe (Thrace), 97% in Asia (Anatolia). Also controls the Bosphorus Strait and the Dardanelles, vital sea links between the Black Sea and the Mediterranean. Its strategic position has made the area of prime importance throughout history.

Tourism, agriculture and industry are all important to the economy. It is self-sufficient in agriculture. Remittances from the 3 million Turks working in Western Europe are a significant source of foreign exchange. Inflation in the 1990s, again in 2001 and the devastating 1999 earthquake have slowed growth. There has been massive development of both the Tigris and Euphrates river basins in the east.

The economy needs to be modernized in preparation for possible entry into the EU. Turkey has the world’s 17th largest economy. It is, at the same time, one of Europe’s poorer nations yet the richest and most developed of the six Turkic nations of west and central Asia.