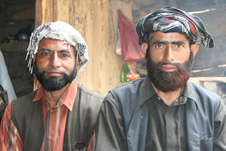 The racial, ethnic, religious and linguistic diversity together with the caste system complicates any analysis of the population. A 1991 survey identified 4,635 distinct people groups.

People Groups based on culture and caste rather than language are the more important for understanding India”s complexity. The Indo-Aryan invasion and conquest of India three millennia ago led to the marginalization of the original inhabitants (many of the tribal peoples of today), subjugation of much of the Dravidian population and the emergence of multiple mixed race groups (now backward castes). The caste system established Brahmin control over the majority. Fundamental to Hinduism, it pervades all religious and social structures in India. Caste discrimination is forbidden by the constitution, but is socially important for over 80% of the population. There are an estimated 6,400 castes. Each functions as a separate group because of the social barriers that separate them.

Religion
India’s constitution provides for full religious freedom of worship and witness for all religions. The rise of Hindutva extremism resulted in a hate campaign against Muslims in the early 1990s and against Christians in the late 1990s as being followers of “foreign” religions. Anti-conversion legislation and imposing legal restrictions on Christian activities has been strongly demanded. Some states have enacted such legislation and condoned a rising wave of violence and even murder of Christian workers. Many are concerned at the practical erosion of guaranteed religious freedoms.

Area: 3,166,000 square kilometers with additional 121,000 square kilometers of Kashmir being administered by Pakistan and China. Geographically and politically India dominates south Asia and the Indian Ocean. There are 29 Union States and 6 Union Territories. Note: more detailed statistics given under individual states.

The economy is predominantly agricultural which includes 64% of the labor force. However, rapid industrialization and urbanization is taking place. India is now a nuclear power and has a space industry. It is one of the world leaders in computer software production.
Economic growth accelerated in the 1990s but has been offset by high birth rate, illiteracy, prejudice, widespread corruption and bureaucratic inefficiency. The 250 million members of the middle class would benefit most from the market reforms and liberalization. Over 600 million live in deep poverty, and 300 million live below the poverty line. India”s widespread use of English gives the country a major advantage as its economy opens up to the world.