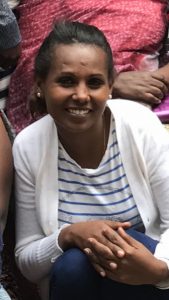 Deborah is from Eritrea. When she was young her parents got a divorce. Deborah, along with her four siblings, were separated from each other. Her father beat her mother and the children who were living with her. He then took all five kids and sold them. Deborah was sold to a home where six men lived. She cooked, cleaned, and took care of them. They abused and beat her so much that she decided to take her own life.

Deborah walked to a nearby river to end her life. When she arrived she saw one of her neighbors. The neighbor asked her what she was doing at the river. Deborah said she was ready to die. The neighbor asked her to wait and come with her to meet some of her friends. Deborah went with her neighbor. There she was introduced to Christians and she became a Jesus follower. The men she had left were very angry. They had Deborah arrested and put in prison for leaving them. In prison she was beaten. She escaped and decided to flee to Ethiopia.

She found a home in the refugee camps and was allowed to travel to a nearby town where she worked in an orphanage. In the refugee camp she met a man who was also a refugee. A short time later they were married. Deborah’s husband is now a pastor. They have two small boys. She is doing well.

There are endless stories like this in all refugee camps. But, there are also stories that do not end so well. And, in all cases there are countless opportunities to share the love of Jesus with the refugees. Soon Jesus becomes not only their salvation but also their peace, strength, and comfort.

There are also countless opportunities to share the love of Jesus with ladies who are beaten as was Deborah. They are drugged, abused, and used by dirty men called “johns.” They live in captivity of dirty men we call “pimps.”

THEY LIVE ON STREETS WHERE WE LIVE.

THEY LIVE ON STREETS ON WHICH WE TRAVEL.

THEY LIVE NEAR OUR SCHOOLS.

THEY LIVE IN A WORLD WE CALL HUMAN TRAFFICKING!

And, we drive by…sometimes in ignorance and

sometimes because we refuse to be Jesus for them.