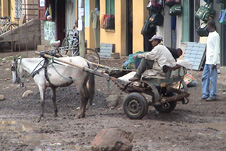 National working language Amharic; 65% of population are able to speak it.

North Ethiopia was one of the first Christian nations, dating from the 4th Century. The Ethiopian Orthodox Church was the State Church from 1270 until the 1974 revolution. The Marxist regime persecuted Christians, especially Evangelicals. Many church buildings were destroyed and congregations scattered. However, since 1991 there has been unprecedented freedom for worship and witness. The government now seeks to deal even-handedly with the Ethiopian Orthodox Church and the increasingly active and growing Muslim minority.

Fertile mountain plateau surrounded by the drought-prone lowlands and deserts of the Red Sea coast, and borders on Eritrea, Somalia, Kenya and Sudan. It is landlocked as a result of the secession of Eritrea.

The main export is coffee – believed to have originated in Ethiopia. The government has initiated wide-ranging reforms and is developing the communications network. This follows decades of underdevelopment due to wars and famine. Periodic droughts and the 1998-2000 war with Eritrea have slowed economic development. Unemployment is over 35%.