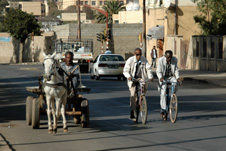 Prayer Needs:
Pray for humility, willingness to compromise on the part of the leaders, and a just peace to end hostilities, mainly with Ethiopia, that neither country can afford.

Fear of Islamist extremism and Christian evangelicalism has virtually ended international NGO projects and aid and has restricted the entry of expatriate Christian workers. Pray that Christians may be fervent for Jesus and make a significant impact on their nation and beyond.

Pray for the return of Christian missionaries to serve the Church.

People: There are nine indigenous peoples.

Religion:  There is some freedom of religion but the fine balance between the Muslim and Christian population tempers that freedom with restrictive policies. The Christian population is somewhat limited to the Orthodox Church, which is weak both in public influence and in the influence of individual members.

Economy:  The economy has been devastated by thirty years of war, periodic drought, and lack of infrastructure for development. There is potential for mineral extraction and light industry with a highly motivated population in a strategic location.