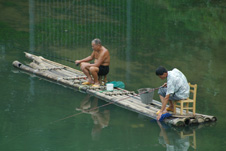 Hui 0.84%.
Chinese Muslims in all provinces, especially Ningxia and Gansu.

Mon-Khmer 0.05%.
23 peoples in southern provinces of Guizhou, Guangxi and Yunnan.

The goal of any Marxist government is the elimination of all religion. In the 1950s the government engineered the infiltration, subversion and control of all organized Christianity. By 1958 control had been achieved through the Three Self Patriotic Movement among Protestants and the Catholic Patriotic Association among Catholics. During the Cultural Revolution even these puppet structures were banned and all religious activity forced underground. This gave birth to the house church movement.

In 1978 restrictions were eased and the TSPM and CPA resurrected as an attempt to regain government control of thousands of house churches. This has been partially successful. The collapse of Communism in Europe is perceived by leaders in China to be the result of the influence of “religion” in the lives of people.  This has led to strict control over Christian and Muslim organizations and all unregistered activity is repressed wherever possible.

All figures are estimates.

The Communist Party claims that there are 100 million ”believers” in the five recognized religions (Buddhism, Daoism, Islam, Catholicism and Protestantism) with 85,000 registered meeting places and 300,000 religious personnel. The actual figures are probably double this.

The beliefs of many Chinese and minorities are a blend of folk religions, Daoism and Buddhism. There are three major strands of Buddhism: Mahayana and Theravada among the Chinese and southern peoples such as the Dai, Zhuang, Manchu, etc., and Lama Buddhism among the Tibetan and Mongolian peoples of the west and north.

Islam is dominant in Xinjiang and Ningxia, and is the major religion of the Hui, Uygur, Kyrgyz, Kazak, Dongxiang, etc.

Area: 9,573,000 square kilometers…the third largest state in the world. China also has the highest mountains and plateaus in the world. The climate varies from tropical Hainan in the south to sub-arctic Heilongjiang in the north. Hong Kong, Macau and Taiwan are all integral parts of China, though their statistics are not included here.

The Cultural Revolution, 1965-1968, applied an extreme Marxist economic system and was a failure. In 1978, a conflict began between the hardliners and pragmatists within the Communist government to determine the degree of economic liberalization to be pursued. First agriculture and the industry was privatized with dramatic improvements in food production, consumer goods and living standards. Massive growth in the 1980s and somewhat slower growth in the ”90s have partially restored China’s industrial might after two centuries of eclipse. It is now the eighth largest economy in the world.

The greatest growth has been in Hong Kong’s hinterland and more recently in most coastal cities. Fear of political liberalization, widespread corruption and unwillingness to deal with large state- and army-run industries is currently limiting continued growth. The massive increase in unemployment and widespread poverty could create serious social unrest.

Unemployment is officially 4.8%, but it is estimated that the urban labor surplus is 18% and rural 30%. This means about 200 million without a meaningful income.