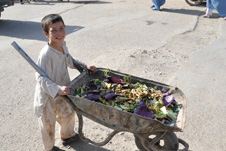 People:
There has never been a census or careful ethnic survey, but reports indicate there are 70 people groups inside Afghanistan.

In the year 2000 reports indicate there are more than 5 million refugees outside the country. About 1.4 million are in Iran. About 2.2 to 3 million are in Pakistan. The balance are scattered across the world.

The literacy rate is reported to be 10-31% but it is much lower for women. The official languages are Pashto (used by 50% of population) and Dari (Afghan Persian used by 35% of population). Two languages have the New Testament. Three others have portions of the Scripture.

Note: Non-Muslim figures may be much lower than stated.  No Christian churches are permitted. The number of Afghan Christians is estimated to be 1,000 to 3,000. Some Christian expatriate workers have been permitted to serve in relief and social uplift programs.

Area: 652,225 square kilometers – dry and mountainous, but with fertile valleys.

The economy has been shattered by 22 years of war. The countryside was bombed and mined. Half the housing, most of the complex irrigation systems and a high proportion of the livestock were destroyed. The most lucrative agricultural crop is now opium (Afghanistan is the world’s largest producer), which has paid for weapons for the warring factions. Recovery has been slowed by the radical extremes of the Taliban government and widespread environmental and structural damage inflicted on this tragic land.